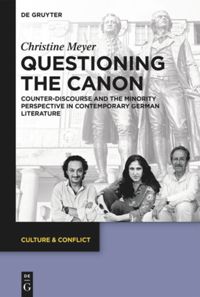 About this book
To what extent do minority writers feel represented by the literary canon of a nation and its body of "great works"? To what extent do they adhere to, or contest, the supposedly universal values conveyed through those texts and how do they situate their own works within the national tradition? Building on Edward W. Said’s contrapuntal readings and Gayatri Chakravorty Spivak’s reflections on the voice of the subaltern, this monograph examines the ways in which Rafik Schami, Emine Sevgi Özdamar, and Feridun Zaimoglu have re-read, challenged, and adapted the German canon. Similar to other writers in postcolonial contexts, their work on the canon entails an inquiry into history and a negotiation of their relation to the texts and representations that define the "host" nation. Through close analyses of the works of these non-native German authors, the book investigates the intersection between politics, ethics, and aesthetics in their work, focusing on the appropriation and re-evaluation of cultural legacies in German-language literature. Opening up a rich critical dialogue with scholars of German Studies and Postcolonial Theory, Christine Meyer provides a fresh perspective on German-language minority literature since the reunification.

Reviews
"Theoretically sophisticated and historically situated, Questioning the Canon: Counter-Discourse and the Minority Perspective in Contemporary German Literature is a novel and welcome contribution to the study of 'migration literature' in contemporary German letters. By focusing on selected writers of Middle Eastern heritage, Meyer offers an indispensable in-depth analysis of the intertextual themes and strategies of their work and shows how they negotiate their own cultural inheritance with homage to German literary models." Azade Seyhan, Fairbank Professor in the Humanities, Department of German, Bryn Mawr College
"Meyer's monograph is a rare, sophisticated, and beautifully translated treatise that brings conceptual rigor to the complexity of migration literature in Germany since the 1970s, while situating it in broader Germanophone literary questions from the 19th century onward. Meyer's scholarly formation shines through here, showing us how critical vantage points on 'Germanophonie' from beyond German borders can be just as promising as parallel inquiries into 'Francophonie' have been throughout the postcolonial period. The monograph invites a new commitment to literary-historical clarity, as we enter the next half century of Germanophone literature of migration." David Gramling, Professor of Central, Eastern, and Northern European Studies, University of British Columbia

"This book is a revelation. For too long, much literary study has been limited by a methodological monolingualism, refusing to acknowledge the creative potential of an emerging translingual poetics. Christine Meyer boldly questions this status quo. She has assembled a remarkable corpus of exophonic, diasporic writing in German, and her sustained focus on canonicity reveals the progressive hybridization of national literatures. The result is essential reading for all those interested in cultural transmission and literary creativity." Charles Forsdick, James Barrow Professor of French, University of Liverpool, and UK Arts and Humanities Research Council Theme Leadership Fellow, Translating Cultures